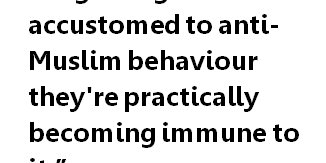 Is Islamophobia an issue the Welsh should worry about?

With 1.5% of the Welsh population being Muslim, is Islamophobia an issue that affects Wales? Is there really intolerance and racism within our valleys? And has it been on the rise?

Well it looks like we’ve found the cure for racism; become a Muslim! We’re “practically immune”! Hi my name’s Shazia, but you can call me Shaz, nice to meet you. I’m the new columnist for Race Council Cymru. I’ll be sharing my personal thoughts and opinions in this monthly column, discussing what’s trending on Race Equality in Wales. I hope you’ll be interested in my views on topics of race and how they’re reported. I think my perspective will be a fresh outlook on these issues, as it’s not often you hear the views of someone in a similar position to me.

I’m an opinionated and curious 18 year old girl, born and raised in Swansea with Bangladeshi heritage, and of the Muslim faith. I’m currently studying A-Levels, one of which is Media Studies so expect to see opinions on how race is presented in the media (and probably some critique at that).  Although some people define themselves by their ethnicity or religious background, these are just facets of my identity, which do shape who I am.  But my friends would define me as someone who’s late to lectures, can fall asleep just about anywhere and has a penchant for baked goods, seriously who hasn’t? (The chocolate cake in my college canteen is to die for).  I’m also a person who’s always wanted my voice heard, even from the age of four when I was asked what I wanted to be when I grew up, I answered ‘Prime Minister’.  So when I was given this unique opportunity, to look at all the amazing things going on in Wales centred around race equality and community cohesion, I chose to begin with something quite close to home, a specific type of racism; Islamophobia.  Being an all round positive person, I would’ve liked to have started with something more light-hearted, but I can’t ignore the brewing anti-Muslim sentiment.  We’ve seen a lot of Muslims in the media lately, and I’d like to shed some light on the topic. 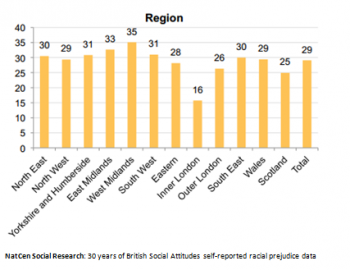 I’m going to begin with something that baffles me; the fact that some people can still cling to their statements of ‘racism isn’t that much of an issue, its 2015!”  From my personal experience, these people are usually white, and middle aged, a demographic who wouldn’t typically ever experience racism or race discrimination, (I think that says it all.)  And to that I sigh, groan, and shake my head slowly from side to side.   I could tell them that the statistics don’t agree: NatCen’s British Social Attitudes (BSA) survey presents a rise in the percentage of people who describe themselves as racially prejudiced.  From the beginning of the millennium up until recent years there’s been a 9% increase in Wales alone.  Also let’s bear in mind that these are openly racist people, this figure doesn’t account for all the closet racists out there.  The Guardian highlighted the link between the findings and widespread Islamophobia, and how it is ‘setting community relations back 20 years’.

However, more relevant evidence is the hashtag that trended on Twitter nationwide ‘#KillAllMuslims’.  I’m still wondering why Twitter allowed the tag to grow on their website and didn’t use community guidelines to nip it in the bud.  If this is what ‘free speech’ is, I ask that we redefine the meaning of this warped interpretation; free speech is not the same as hate speech.  To explain to you how a few opinions on a website can affect people, I’ll tell you that I was doing my coursework on the night this happened, taking a break to check twitter, I saw tens of thousands of people in my country calling for my genocide.  Needless to say, I couldn’t ignore it or go back to my work.  Human beings in 2015 were calling for the mass murder of 1.6 billion people, I thought as I put away my notes on 1930’s Germany.  I also wonder if the mainstream media and the public would’ve reacted differently if a similar, just as disgusting hashtag had trended that called for the murder of another religion, ones like #KillAllHindus, #KillAllChristians, or #KillAllJews. 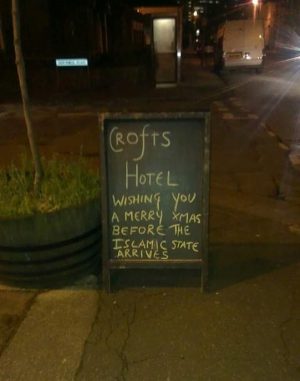 A better way to stay up to date with the Islamophobia in Wales, would be to visit the IslamophobiaWatch website and click on Wales.  You’ll be met with stories such as; the Welsh Ukip parliamentary candidate who handed out leaflets with anti-Muslim content which was wildly offensive, intruders breaking into a Cardiff mosque, causing thousands of pounds worth of damage and stealing at least £4,000 of charity money, the vandalising of Muslim graves, and The Croft’s Pub in Roath Cardiff, warning their customers about the impending Muslim takeover.  (Despite being less serious, Muslims still have to walk past this).

Recently, a family friend in Swansea was shopping in Tesco.  She spoke about a man who followed her through the aisles, hurling racial abuse at her.  Eventually he was removed from the store, but when she finished and left, she discovered he’d been waiting for her outside to carry on where he’d left off.  Not only was I appalled that a young mother was treated this way, I wondered why Tesco seemed to be completely empty that day.  Why were there no customers or store assistants there to intervene, or defend her?  A friend of mine was waiting at a bus stop in Gorseinon Swansea, when an older woman began demanding that she leave the country, and carried on spouting incomprehensible racist gibberish.  What stood out to me was that she said when they had gotten on the bus, the verbal abuse got worse, telling her she was ‘invading scum’ and all of the other passengers took to staring out of the windows.  My friend (who was born in Wales, not an invader of any sort) was too shocked to muster a response.  I think a realistic aspect of society is that people are generally afraid to talk about racism, and maybe that’s why it’s underrepresented in the media.  We’re readily seeing the presentation of how violent and destructive “Muslims” are, but what about the fact that the vast majority are victims of being targeted, by the media and by race hate?

However, I do understand the reasons behind the misinformed idea that racism is dying out; it’s a barbaric, old fashioned notion, but something that isn’t old fashioned – the media, and what does the press constantly tell us about [insert  any ethnic/religious minority here]? 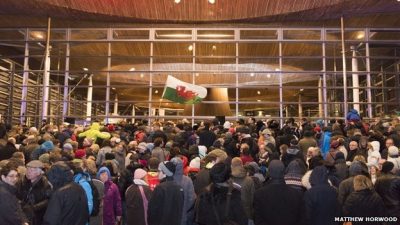 Additionally, I think we need to address the elephant in the room (or should I say on the page?) The recent catastrophic events in France obviously has a major effect on this issue and leads to further international islamophobia.  The French attacks saw 1,000 people stand before the Senedd in Cardiff Bay in a minute’s silence. And Saleem Kidwai, chairman of the Muslim Council of Wales declared ‘my condemnation is absolute’.

Events such as this have a direct effect on what happens here in Wales too.  This was seen after Lee Rigby’s death, when hate crime more than doubled in South Wales.  It’s led people to hold all Muslims responsible for the actions of a few lunatics, (no thanks to David Cameron who basically agreed with this view) and as I mentioned earlier, people close to me have dealt with the backlash.  I’d like to share my view on the events, so that you can have the opinion of an actual Muslim.  In Islam, the value of human life is beyond words.  The Quran says ‘If you kill one innocent life, it is as though you have killed the whole of humanity.  And if you save one innocent life, it is as though you have saved the whole of humanity’.  This is but one of thousands of articles of the Islamic faith that show its nature, a nature of peace, unity and mercy.

This is but one of thousands of articles of the Islamic faith that show its nature, a nature of peace, unity and mercy.  I feel like I have to say this explicitly, because there are still a minority out there who don’t understand; terrorism is against Islam, it goes against everything Muslims believe in, and those who commit these crimes are far from Muslim.  Therefore, Muslims are in no way responsible for the atrocious actions committed in Paris, and numerous religious figures have publicly condemned them.  I am deeply saddened that these lives were lost, including the life of a Muslim police man.  I would also like to bring attention to the fact that a Muslim man saved the lives of 15 Jewish hostages, and his actions display true Muslim character. 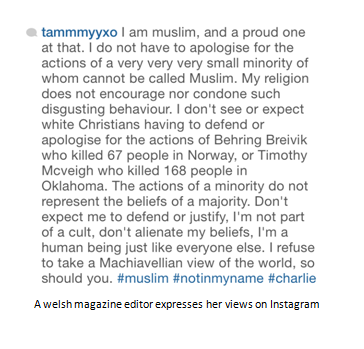 However, #JeNeSuisPasCharlie, #iAmNotCharlie.  I believe that there is a difference between free speech, and hate speech, between free speech and intolerance.  The Prophet Muhammmed is more important to Muslims than their own parents, so yes I am offended by these images, they hurt.  Just as we would all be offended if anti-Semitic content was published, and it seems Charlie Hebdo were even offended by Maurice Sinet, who they fired when he created anti-Semitic content in 2009.  And yes, I am deeply saddened by the deaths in Paris, just as saddened as I am by the deaths of 2,000 people in Nigeria killed by Boko Haram the following day, (which received considerably less media coverage).  I’m saddened, just as I am about the deaths in Iraq, Afghanistan and Pakistan.  And I am saddened by and fearful of the backlash that all true Muslims will and are facing right now.

At times like this, the media play a pivotal role in shaping the social climate, and we’ve seen warped and negative media coverage around the world, which no doubt, affects people’s thoughts and actions.  The BBC have used terms such as ‘Islamism’ instead of the actual word ‘Islam’.  Representing ethnic and religious minorities as the ‘other’ only creates more hate.  Maybe this is what led to the recent attack on a an Asian man in Mold North Wales taking place on the January 15th, a chilling twist to the story is that the attacker was heard shouting ‘White Power’.  I don’t know about you but I feel like the heavy connotations that phrase carries, makes the situation even more ominous.

The Ethnic Youth Support Team (EYST) will be conducting a session with South Wales Police, where they have invited the local community to voice their opinions on whether the French attacks have had an effect on their daily lives, whether they’ve experienced racism that they feel is a result of it, and how they should go about reporting it.  I will be attending the event and I hope to share what I learn in the next column.

This is important, and needs to be talked about, all while remembering that racism and islamophobia is spread by a minority.  Current events might make it more acceptable, but we have to remember that the majority of us Welsh people are open minded citizens who are all for unity.  And we have to remember that Muslims are not crazed killers, but peaceful and (would ya know it?) all for unity.  Wales belongs to all, no matter what we look like, and what’s more is that we celebrate our differences; we’re all unique and proud to be Welsh.  If you want to spread your own view of the race equality in Wales, I encourage you to take to social media; Tweet, blog, talk!  About how Welsh people stand against racism, in solidarity.  Social media gives everyone a voice, and the world is listening.

Thank you for reading!  I hope you’re back next month, so I can share my views on what’s trending on race equality in Wales.